Introduction to the Firewall System

When Zentyal is configured as a firewall, it is normally installed between the internal network and the router connected to the Internet. The network interface which connects the host with the router has to be marked as External in Network -> Network interfaces, therefore the firewall can establish stricter policies for connections initiated outside your network.

Five different sections are available for configuration depending on the work flow of the traffic you are addressing:

the file server from the local network).

the Internet (example: restrict access to Internet or to specific addresses to some internal clients and restrict communication between internal networks)

using HTTP from the server itself).

receive messages from the Internet).

allow access to a internal server from the Internet).

You have to take into account that the last two types of rules could compromise in security of Zentyal and the network, so you must be very careful when modifying them. 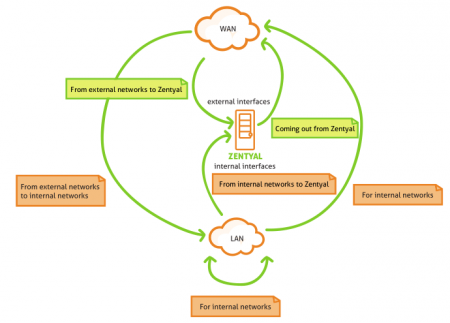 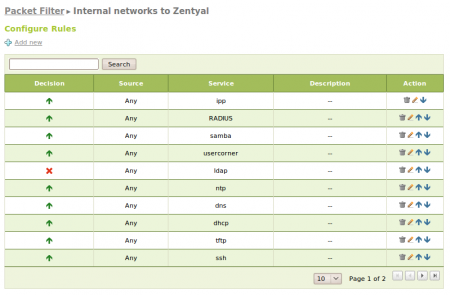 Normally, each rule has a Source and a Destination which can be Any, an IP address or an Object in case more than one IP address or MAC address needs to be specified. In some sections the Source or Destination are omitted because their values are already known, for example Zentyal will always be the Destination in the Traffic from internal networks to Zentyal section and always the Source in Traffic from Zentyal to external networks

Additionally each rule is always associated with a Service in order to specify the protocol and the ports (or range of ports). The services with source ports are used for rules related to outgoing traffic of internal services, for example an internal HTTP server. While the services with destination ports are used for rules related to incoming traffic to internal services or from outgoing traffic to external services. Is important to note that there is a set of generic labels that are very useful for the firewall like Any to select any protocol or port, or Any TCP, Any UDP to select any TCP or UDP protocol respectively.

The rules are inserted into a table where they are evaluated from the beginning to the end. Once a rule accepts a connection, the rest are ignored. A generic rule at the beginning of the chain can have the effect of ignoring a more specific one that is located later in the list, this is why ordering of rules is very important. There is the option of applying a logical not to the rule evaluation using Inverse in order to define more advanced policies.

For example, if you want to register the connections to a service, first you use the rule that will register the connection and then the rule that will accept it. If these two rules are in inverse order, nothing will be registered, because the first rule has already accepts the connection. Following the same logic if you want to restrict the access to the Internet, first restrict the desired sites or clients and then allow access to the rest, swapping the location of the rules will give complete access to every client.

To configure a redirection you have to establish the Interface where received traffic needs translation. The Original source (which can be the Zentyal server, a source IP or an object), the Original source port (which can be Any, a Default port or Port range), the Protocol and the Source (which can be also Any, an IP address or an Object). You will also specify the IP address of the Destination and finally the Port where the destination host will receive the requests. This can be same as the original or not. There is also an optional field called Description used to clarify the purpose of the rule.

Additionally you can also Log the connections that go through this redirection and Replace source address. If you check this last option the internal host will see Zentyal as the original source of the connection, which is useful if Zentyal is not the gateway for the internal machine. 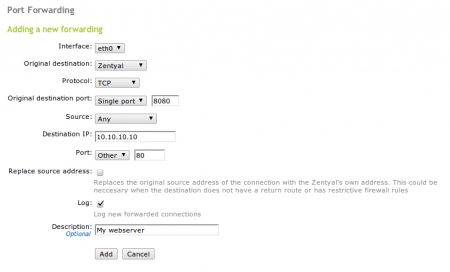