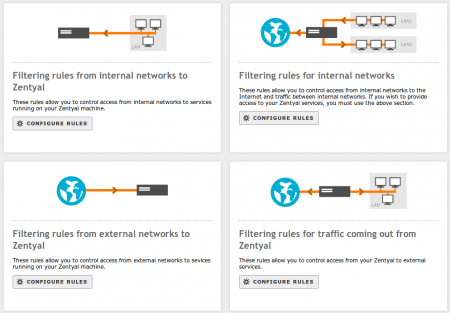 Each one of the sections above is in charge of controlling different traffic flows depending on their source and destination:

(example: restrict access to Internet from a set of hosts, forbid the DMZ to access other LAN segments)

(example: allow any host in the Internet to access a webpage served by Zentyal).

(example: Proxy connections that are done by Zentyal on behalf of one user).

You have to take into account that allowing Internet connections to Zentyal services could be potentially dangerous, study the security implications before modifying the third set of rules. 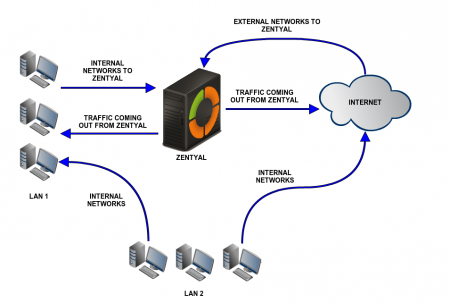 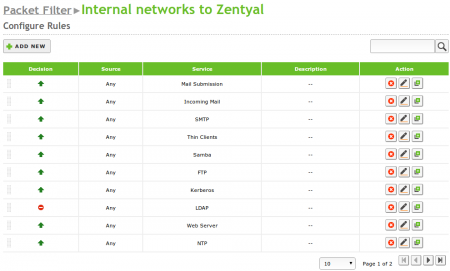 Normally, each rule has a Source and a Destination which can be Any, an IP address or an Object in case more than one IP address or MAC address needs to be specified. In some sections the Source or Destination are omitted because their values are already known, for example Zentyal will always be the Destination in the Filtering rules from internal networks to Zentyal section and always the Source in Filtering rules from traffic coming out from Zentyal

The rules are inserted into a table where they are evaluated from top to bottom. Once a (DENY/ACCEPT) rule matches a connection, the decision is taken and filtering stops, so the rules below it are not considered. Logging rules produce the log and continue evaluating rules.

A generic rule at the beginning of the chain can have the effect of ignoring a more specific one that is located later in the list, this is why the order of rules is important. You can also apply a logical not to the rule evaluation using Inverse match in order to define more advanced policies. 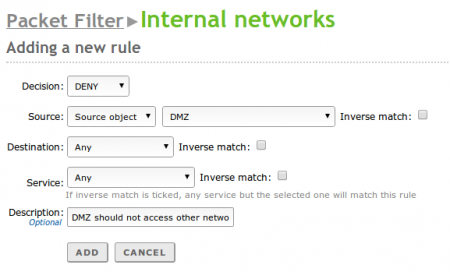