Zentyal integrates pptpd (2) as its PPTP server. This service uses the port 1723 of the TCP protocol and the GRE encapsulation protocol.

Configuring a PPTP server in Zentyal

To configure your PPTP server in Zentyal go to VPN ‣ PPTP. In the General configuration tab define the subnet used for the VPN. This subnet has to be different to any other internal network you are using in your local network or another VPN. You can also define the Primary Nameserver and Secondary Nameserver. In the same way you can configure the Primary WINS and Secondary WINS servers. 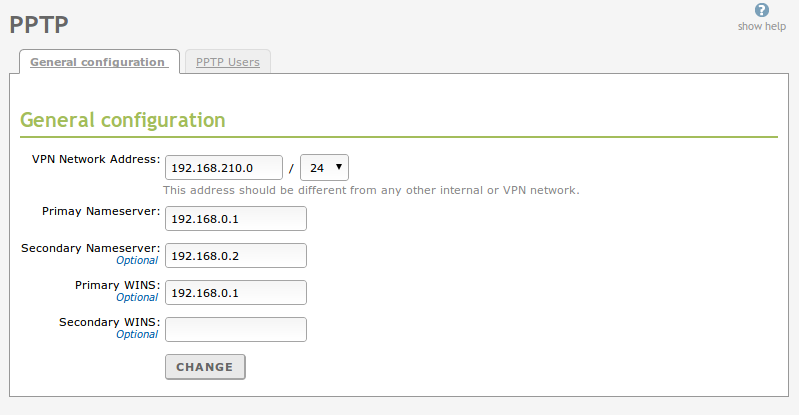 Given the limitations of the PPTP server, it is not currently possible to integrate the LDAP users, managed through Users and Groups, so it will be in the tab PPTP Users where you will define the list of users and its associated passwords that will be able to connect to the VPN PPTP server. Additionally, you can statically assign the same IP address to a user inside the VPN subnet, using the configuration field IP Address.

As usual, before being able to connect to your PPTP server, you have to check that the current rules of the firewall allow the connection to the PPTP server, which includes the 1723/TCP port and the GRE protocol.