Zentyal implements a Captive Portal service, which allows you to limit the access to the network from the internal interfaces .

Configuring a captive portal with Zentyal

Through the Captive Portal menu you can access the Zentyal's captive portal configuration. 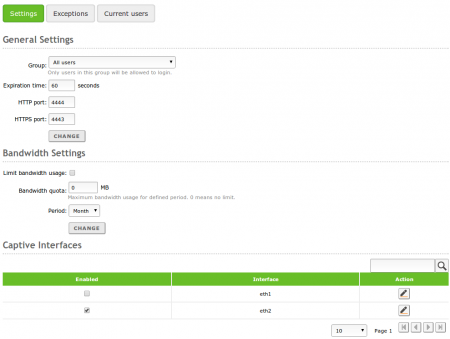 If you define a group, only users belonging to it will be allowed to access through the captive portal. By default access is allowed to all registered users.

Here you can find a list of all the internal network interfaces. The captive portal will limit the access to the interfaces that are checked in this list.

You can also see a form that allows you to limit the bandwidth to a given amount over a given time interval. To use this option, you have to have the module Bandwidth Monitor installed and enabled. If you have enabled a limit, after enabling the captive limit over one of the interfaces, the Bandwidth Monitor will also be enabled over the same interface. You can see the configuration and reports going to Network ‣ Bandwidth Monitor.

You can set up exceptions to the captive portal, so that certain Objects or Services will be able to access the external network without having to pass through the log-in forms.

The Current users tab contains a list of the users which are currently registered in the captive portal.

The following information for each user is available:

Name of the registered user.

IP address of the user

If the Bandwidth Monitor module is enabled, this field will show the bandwidth use (in MB) of the user for the configured period.

From this list it is also possible to "kick" the users or "Extend Bandwidth Quota" their credit. Kicking the user will instantly close the user's session, leaving him without Internet access. Extending the quota will add the default quota to his/her current credit.

When a user, connected to Zentyal through a captive interface, tries to access any web page using his/her browser, he/she will be automatically redirected to the Captive Portal, asking for authentication.

After a successful login, a pop-up window will be shown to the user. This window keeps the user session open, so it should be kept open until the user disconnects from the Captive Portal.

Most browsers will automatically block the pop-up, you have to always allow pop-ups from Zentyal. 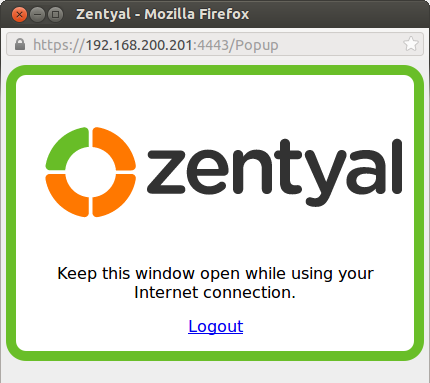